why I am not writing another book

I sometimes get asked if I am writing another book, usually by someone who has read one of the 5 I wrote. Sometimes I have been told that I am "wasting talents" since I am not writing books. That is not how I feel. I believe I am faithfully following the path Jesus has led me down. Here are some milestones on that path:

1. During my Ph.D. studies, I was struck by the New Testament and early church identification of false apostles and teachers as those who "peddled the word of God." It occurred to me too slowly--being overeducated but not all that bright sometimes--that perhaps the Christian publishing industry was a source of darkness rather than light.

2. Several years ago, I was invited to speak at Expolito, the Spanish Christian Booksellers annual meeting in Miami, Florida, at the release of a Spanish translation of my book on ministry in the Spirit according to Paul. Since I could not keep up with the speed of the conversation over several days, I was forced to pay attention to what I was seeing. For the most part, the convention wasn't even bothering to "peddle the word of God"--they were peddling everything but. (They learned from their English language version's bad example). Hmmmm, I thought, this is NOT good. Not good at all. I think during that time the penny dropped for me that I needed to stop writing books and put the emphasis elsewhere.

3. I became more and more aware in homes that I visited and conversations with Christians that we were full of books, but not people of One Book. People talked about what their pastor had preached or favorite author had written, but NOT about what God had told them to obey. We are a church and nation of spiritual prurience, ever spectating from the bunker, rarely in the game or on the front line. I began to connect the dots: we are what we eat, and we have been feeding on the chaff of human doctrine, not the meat of God's Word. There is an old principle that applies: if the horse you are riding on is dead, for God's sake, dismount.

4. Jesus' parting charge to us kept coming to my mind: "teach them to obey all that I have commanded to you." We have distorted that into left-brain rationalism without action, rock-star conference culture of hero worship and heads full of knowledge but lacking wisdom, tough-mindedness ("wise as a serpent") and a cutting edge to the mission of our lives. The salt has lost its saltiness, and our little lights no longer shine. The words we overlook in Jesus' charge are crucial: OBEY and ALL. He didn't put a big premium on understanding and analyzing. The emphasis was on standing-under and actualizing His word. We need to be people of one book--in compliance to its wisdom we become an arrow shot from and to heaven.

5. One day I was pondering why church-as-we-know-it is not the scary threat to hell's doors that Jesus said he would build ("I will build my church, and the gates of hell will not prevail against it"). And, it is not even mildly effective at evangelizing not-yet Christians in our culture. It finally dawned on me. This is NOT the church Jesus built. This is a straw house on sandy foundation built on mere human wisdom and celebrity or tradition. This is the church WE built--that is why it is so pathetic. Jesus never told us to build churches. He told us to train them to comply and practice everything he imparted to us. If we do that, He does his part--builds a church whose advance hell can't stop. I see it now here, now there. When the rains come down and the storm crashes in, all that will stand is such houses built on the rock of obedience to Jesus as Lord.

So here is the "book" that I am supposed to write. Paul's self-understanding in 2 Corinthians 3:2-4 is my example to emulate: "You yourselves are our letter, written on our hearts, known and read by everybody. You show that you are a letter from Christ, the result of our ministry, written not with ink but with the Spirit of the living God, not on tablets of stone but on tablets of human hearts. Such confidence as this is ours through Christ before God."

The book I am to write is pages on others' lives as I seek to obey all Jesus taught, and teach them to do the same. I am not to write a book on paper between covers but on souls with skin. Here are some of the best books and articles I am writing that you may have never read: Ingrid, Julia, Jeff, Kirstie, Carlo, Elizabeth. I hope you get a chance to read them some day.

Whose lives are you writing the kingdom of God upon?

(Oh yeah, one other milestone. AJ, Julia and Jeff Rogers kept pressing me to write something on the internet--Julia got me to blog. I see this as more of a journal than publishing. More a soap box of what I would shout across the nation to Alaska and Hawaii, than what anyone else would ever want to "publish." Since only about two and half people ever read it, it has no danger of supplanting my life-writing mission).
Posted by Brian Dodd at 3:20 AM 6 comments:

Someone I just met suggested that I "friend" on facebook Steve, whom I have known awhile. I cracked up--just new to facebook, I thought this is going to be a fun ride.

Friend, friended, befriended, frenemy...I sent Steve a note through our new facebook connection joking about it. (We already fly, call, email, skype phone, skype IM...just what we needed--one more way to lob verbal provocations at each other... :-)

Steve replied with a definition of friended that made me laugh to the point of hurting myself. I had to share:

"made a tenuous cyber connection on a website known as "social media" so that you can have relationship without any responsibility.... the ultimate relational format for those who love illusions since reality is too painful and complicated, the ultimate for those who feel they do not exist unless they are being broadcast and viewed..."
Posted by Brian Dodd at 5:36 AM No comments: 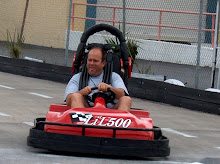 The hanging tongue works like a cheetah's tail to assist in cornering...

Followers (of this blog)